An interview with Jimmy Santiago Baca

Jimmy Santiago Baca had a story to tell me.

“Just this morning, I finished editing two manuscripts for this kid who is considered one of the most violent creatures ever born,” he said in a telephone interview from his home in Albuquerque, New Mexico. “He came by to pick up his manuscripts, and later he called me on the phone, crying. He said, ‘I’m sitting here crying because I don’t know the words to tell you what you’ve done for me. You’ll never know what you’ve done for me.'”

He told me the story in response to a question I’d asked of him, “Why is it so important to you to open doors for others?”

Coming from Jimmy Baca, his answer hadn’t surprised me.

What: “Dreams for a Better Life,” special presentation by Jimmy Santiago Baca
When: 7-9 p.m. Tuesday, Oct. 26
Where: Castle on the Hill Auditorium
Free and open to the public

More online:
Read about Jimmy Santiago Baca’s visit to Siouxland and how he hopes to help troubled youth.

“I’ve always been of the frame of mind that you have to give back,” he said. “I’ve never been able to understand people who garner so much public prestige and then don’t go out and service other people. I take [giving back] in the same manner that I take getting up on any morning, and somehow don’t see myself as that important. It’s just a job I do.”

To the thousands of children and illiterate adults Baca helps each year, however, it isn’t just a job. It’s a second chance. Often, a last or only chance.

Baca — one of the nation’s foremost Latino poets and authors — was illiterate at age 21 when incarcerated for a drug offense. By teaching himself to read and write in prison and under the tutelage of Mother Jones magazine’s former poetry editor Denise Levertov, Baca learned two of life’s biggest lessons: the power of personal forgiveness and “do unto others as you would have others do unto you.”

Baca also discovered the transforming power of literacy. He regularly tours throughout the U.S. conducting writing workshops for children and adults, helps illiterate prisoners write letters to loved ones, and works with inner city students and gang members in an effort to provide some direction to their lives and help them discover their voice.

He also continues to explore his own voice; through his poetry, his novels, his memoirs and screenplays, he writes of racial injustice, of drug addiction and murder, of poverty and the violence it breeds. 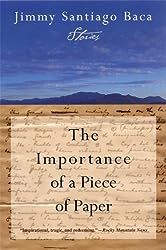 In The Importance of a Piece of Paper: Stories

— his first collection of short stories published earlier this year — Baca maps the territory where Old World traditions contend with New World ambitions, and disenfranchised characters struggle to make something of themselves in the world while somehow keeping their souls intact.

In his book Working in the Dark: Reflections of a Poet of the Barrio

, he writes of being immersed in drugs and petty crime, and discovering the power of language in prison after reading Neruda and Paz. 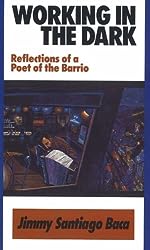 It is for all these reasons that Baca tries to break through during his visits with children or those ‘living in dark places’ in their lives.

“I try to break through all the despair and all the loneliness and all the hopelessness, and I give them examples and illustrate certain ideas from stories about wonderful things that are capable of happening to them,” he says. “I don’t take on the responsibility of trying to ‘heal’ anybody. Everybody has their secrets, but I do try to get across the act of forgiveness. We have to forgive other people because we’re not all that clean ourselves.”

Despite the many lives he’s touched, Baca balks at being called a hero. His hero, he says, is the open heart because it is such a hard place to get to.

Yet Jimmy Santiago Baca has his own way of getting through to people. When he talks, they listen.

“The funny thing about working with people from the Naval Academy to the Jesuit seminaries to kids in prison,” he says, “is that you never really know who you’re touching, and then suddenly you hear from somebody a month or year later, and they’ve decided to change their career or get off drugs.”

Unpretentious to the end, he adds, “I’m telling you, it humbles me. I feel like I don’t deserve this.”