Thirty-two years ago, a newly trained organ builder was given a delicate job — to help move the Orpheum Theatre’s Wurlitzer pipe organ to its new location at the Sioux City Auditorium. Had it been left at the Orpheum, it would have been destroyed. The theatre — constructed by Rapp & Rapp in 1927 as part of the Orpheum Circuit — was about to undergo some major renovations. 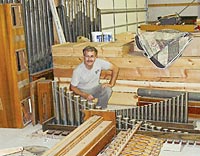 Dismantling the Orpheum’s original organ was a major process, considering that it contains more than 1 million pieces, said Rick Darrow, who owns Darrow Pipe Organ in Onawa. The weathered pieces are then cleaned and prepared for rebuilding, which will be complete in fall 2004. (Photo by Jody Ewing)

Once home to symphony performances and hosted by entertainers such as Fred Astaire and Katherine Hepburn, the remodeled Orpheum became a one-story movie house with a projection booth carved into the former mezzanine balcony. There was no place — and no use — for the $60,000 Wurlitzer organ that for years had provided silent movie sound effects. There also had been leaks in the Orpheum’s cooling system, badly damaging the organ’s pipes. To save the organ from its certain fate, area women’s groups held fund-raisers to support its transfer to and safekeeping at the auditorium.

Thirty-one years later the organ builder was back, this time with a far greater assignment. His mission: to restore the magnificent organ to its opulent grandeur and then return it to its original home.

In August 2002, Rick Darrow of Onawa’s Darrow Pipe Organ worked with his staff to dismantle the 7-ton chest of over 1 million fragile pieces. Together, they hauled it section by section back to Darrow’s shop where they would take apart, clean, replace and rebuild one of Sioux City’s greatest treasures.

A concert this weekend at the Orpheum Theatre featuring the All American Concert Band will support the restoration effort.

A Labor of Love

With proper care and maintenance, says Darrow, pipe organs — including the one at the Orpheum — are built to last a lifetime. Though the restoration process is long and comprehensive, it is putting it all back together and then playing the ebony keys that drives the master craftsman.

“I didn’t start out to be an organ builder,” the Morningside College organ performance major says. “I’d planned on continuing my education in church music.”

A summer apprenticeship to organ builder Lee McGinnis changed all that, as well as the direction Darrow’s life took.

“I ended up being his apprentice for a year and a half, and have been building and servicing pipe organs ever since,” he says.

That was 1971. In 1990 he moved his business to Onawa where he and his wife, Lois, now employ eight full-time workers and a few on a part-time seasonal basis. Twice a year they tune and service organs at more than 300 churches and build and restore pipe organs throughout the Midwest.

Recent projects include building and installing a new pipe organ for the 1st Baptist Church in Johnston, and another for a Des Moines church, as well as re-leathering main reservoirs and offsets for churches in Pocahontas and Correctionville. Darrow still services the first pipe organ he built, which is installed at the Epiphany Cathedral in Sioux City.

“Building an organ from scratch can take up to four years including the architectural design, and restorations up to two years,” says Darrow, who has scheduled the Orpheum’s Wurlitzer for delivery in the fall of 2004.

Darrow’s reputation for quality work and other local ventures led Irving Jensen, Jr., head of the organ restoration project, to hire Darrow for the job. Of the Orpheum’s entire restoration effort, Jensen takes pride in that “95 to 99 percent of the work was done by local craftsmen.”

Dismantling an instrument comprised of many tiny pieces might seem a daunting task, but by marking, dividing and separating units, the process flows as smoothly as the music from its keys.

The work began at the auditorium by removing the 16-foot tuba pipes, then wrapping and labeling each individual pipe. Once Darrow’s staff took apart the woodwork, gathered “toys” and final parts, a mechanical lift removed the console from its perch within the inside balcony walls.

“As soon as we got them back to the shop, the pipes were stored in an upright position,” Darrow says. “If left flat, the metal would begin to collapse.”

The three main chests and other primary pneumatics were then laid out throughout the shop in sections as they, and their contents, were prioritized according to placement within the organ.

“The ‘toys’ are the first pieces to be rebuilt, and include a car horn, xylophone, tambourines, cymbals, drums and wood block,” he says. “There is an entire chest just for sleigh bells, bass and the snare drum.”

Rebuilding the chests comes next, which includes a tibia offset chest, a toeboard and the organ’s main chest.

Darrow says the refinished console’s details will differ — though only slightly — from the original. “It’s made from poplar wood, but not the kind of poplar we tend to think about. This poplar is a type of tulip wood and comes from very large trees.”

Upgrades to the switching system will enable any artist to use the restored Wurlitzer.

“It will be computerized, including the pistons and stops,” says Darrow. “When an artist comes in and plays, it records it digitally where it can be played back. As long as visiting artists know where the piston is, they can change things with the push of a button.”

Moving the organ back to the Orpheum will be an arduous process with its own set of challenges. The blower will be placed above the dome, delicate parts must be moved carefully, and the newly installed switching system will fill an entire room.

But, says Darrow, “We’re just looking forward to getting it back home and putting it back where it belongs. It won’t be long before pipe organ music is ringing through the Orpheum Theatre once again.”