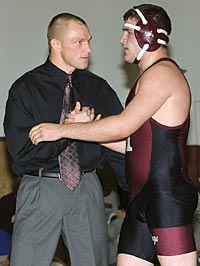 Jager, however, felt ready. During his three years with the Beavers, Buena Vista – a perennial NCAA Division III national power – produced nine All-Americans and a pair of Top 10 finishes in the team standings at the national tournament. Jager also had served under legendary coach Al Baxter, a 1969 Morningside graduate and member of Morningside’s M-Club Hall of Fame.

“I’ve just been real happy with the whole team,” said Jager, a 1996 Buena Vista graduate who began his coaching experience there as a student assistant wrestling coach during the 1995-96 season. “The guys have done real well this year. We went 9 and 7 in duals, which was great, and then we placed second at the conference tournament and tied for sixth at regionals. It’s a good team effort and the guys have been working hard and doing a great job.”

This weekend, between 230 and 240 wrestlers will vie for the national title.

According to tournament director Tim Tushla, a staggering 420 college wrestling programs have been dropped throughout the country since the early ’70s. Tushla – who in the past has organized international wrestling events at Briar Cliff – says he’s working to help bring the sport back.

“I see the [comeback] in the NAIA, particularly,” says the resident Sioux Cityan. “They’ve made it very easy for programs to come back. Five years ago there were 19 wrestling programs in the NAIA and this year there are 28, so it’s grown considerably and we’re excited about that.”

Jager attributes the interest to parental and family involvement.

“I think wrestling is something that is kind of a family thing, and it seems like wrestling parents and wrestling families are pretty close-knit,” Jager says. “And it’s one of the sports, I think, you kind of grow up in. A lot of kids have brothers that do it and they started as little kids. Once families get involved, it really hooks you.”

Fans are also helping to give the sport a comeback, and Tushla says Sioux City is a great location to give it that needed boost.

“We’re within an eight-hour drive of maybe 12 of the wrestling schools, so we’re hopefully going to have a good fan base here and get the local community involved,” says Jager, whose wrestling photography regularly appears in national publications. “Briar Cliff has had wrestling about 10 years or so, and there’s a lot of wrestling fans in this area. We’ve got Nebraska, South Dakota, Minnesota and Iowa, and they’re all big wrestling states.”

Morningside is one of five teams added this year, and two or three more are expected next year. The last NAIA wrestling tournament held in Sioux City took place more than three decades ago, and Tushla credits the city’s hard work for bringing it back this year.

“[The city is] a big part of this,” he says of working with both officials and volunteers. “We’re doing it at the Tyson Events Center, and we’ve also got the NAIA Hall of Fame banquet Saturday at the Convention Center for the wrestlers, coaches, and the public if they’re interested.”

The first wrestling session begins Friday morning at 10 a.m. and by the end of the day, the top eight placers – the “All-Americans” – will be known throughout the United States.

The event’s locale is particularly significant to Siouxlanders this year, and specifically to six Morningside College wrestlers and their families.

In the national spotlight 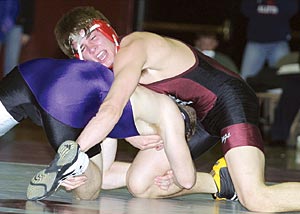 Jake Stevenson wrestled for Boone Central High School in Petersburg, Neb., when Jager recruited him for the Morningside team.

“It’s the biggest meet I’ve ever been to and the most prestigious,” Stevenson said of the upcoming NAIA national event.

At the Central Region Tournament, Stevenson pinned Abel Brujillo of William Penn University in 5:28 in the semifinals. The win against Brujillo came against an opponent ranked third nationally in the NAIA.

“I had four matches, and in the first pinned Dakota Wesleyan’s August Lambers, and in the second match beat Derek Pike [of Waldorf College] by 8,” Stevenson said. “The third was the No. 3 kid in the nation, but Coach said, ‘Go on out and see what happens.’ The kid tried to cradle me and I put him on his back.”

Though modest about his past accomplishments, the Morningside freshman attributes his successful wrestling skills to his father, mother and Coach Jager – all of whom he refers to as his role models.

“My dad wrestled in high school, and got my brother and me involved and kept at us,” he says. “Coach Jager has been a big part in getting me to where I am now, and his practices are pretty touch. My mom never misses any of my games.”

“He got a good seed in the brackets,” said Jager. “He won’t meet the No. 1 or some of the top guys right away, but by winning the regionals he’ll be seeded pretty high in the tournament.”

Freshman heavyweight Nathan Ploen, a 2004 graduate of Woodbury Central High School, compiled a career record of 123-50 as a four-year varsity letter winner and, like Stevenson, is quick to credit his family for his success.

“My dad and mom were always involved way back in Pee Wees,” said the Class 1A 215-pound division state tourney runner-up. “They’ve been coming to my games forever, and are always there trying to help with anything that needs done. They taught me to strive to be better, sort of like having a second or third coach.” 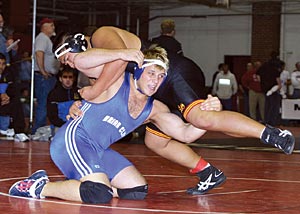 Briar Cliff University wrestler Jeremiah Pottebaum is ranked No. 1 in the NAIA Central Region Ratings after winning the Central Region Tournament in February.

In addition to the Morningside students, Briar Cliff University Junior heavyweight Jeremiah Pottebaum also qualified for the NAIA National Championships. The Bronson, Iowa, native and former Iowa State University student is ranked No. 1 in the NAIA Central Region Ratings after going 4-0 and winning the Central Region Tournament on Sat., Feb. 19.

Pottebaum earned 13 letters for the Eagles of Lawton-Bronson – four each in wrestling, football and track, and one in baseball – and qualified for the state wrestling tournament as a sophomore. He was named this year as Briar Cliff’s team captain.

“I think [Pottebaum] has a very good chance and I think Morningside has a very good chance to place,” Tushla says. “Dana College in Blair will have a strong team, William Penn will be tough, and the defending champs are from Montana State, Northern. The No. 1-ranked team right now is Lindenwood University in Missouri, and obviously they’ll be really tough.”

Siouxland’s finest wrestlers are ready to take them down.

Says Morningside’s kingpin Stevenson, “Being in the top eight is my goal.”