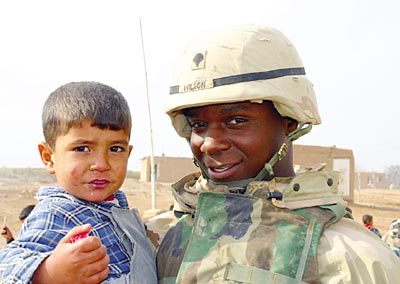 The camera turns its lens on an American doctor as images flash across the screen: a head wound carefully being sewn, an Iraqi mother holding her small son while his foot is rinsed for inspection, a disoriented young Iraqi woman — her face and neck covered with soot — wrapped with a shawl as she waits her turn.

“We’ve come to a little village,” says the doctor. “It’s about 30 kilometers outside of Ebril, and there’s about 15 houses. I was told there would be about 40 people, and so far it looks like there’s about 200.”

In another scene, a voice behind the video camera says, “Say hello to America.” The young Iraqi soldier smiles. “Hello,” he says in English — then lifts and points his rifle directly toward the camera.

The scenes are part of Mike Shiley’s new film, “Inside Iraq: The Untold Stories,” which he will show and discuss at Dordt College on Friday as part of the 2004-2005 Travel and Adventure Film Series sponsored by KDCR, a Dordt College radio station.

The 37-year-old Shiley — a photographer, filmmaker and free-lance journalist — recently returned from Iraq where he spent two months chronicling the lives of the Iraqi people and U.S. soldiers at the height of the conflict while on assignment for ABC News. The 80-minute film, produced and directed by Shiley under his documentary video production company “Shidog Films,” highlights the challenges, opportunities and inside lives in a visual — and visceral — behind-the-scenes journey.

Viewers will take a tour of a children’s landmine hospital, visit remote and impoverished villages with Western medical aid workers, tour an Abrams tank and hear from American soldiers how they feel about their roles in the conflict and about the Iraqi people. 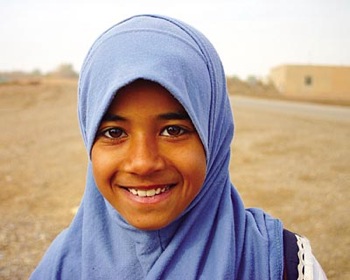 “I wanted to know more about the situation there,” Shiley says of his trip to Iraq and his decision to make the film. “I had one thing going for me and that was I had the passion to try to find the story. I guess I wasn’t smart enough to realize that I shouldn’t be doing this.”

Shiley literally risked his life making his new documentary. He uncovered the shocking video of a real firefight with Iraqi insurgents, flew over the country in a Blackhawk helicopter and witnessed landmine areas being cleared. While in a tank squadron, he rode along on night patrols along the Syrian border in search of terrorists, dropped in on illegal gun market transactions and walked the streets of Baghdad interviewing locals. His search for unique stories and scenes took him to the Kurdish-controlled region in the North, through the infamous Sunni Triangle in Central Iraq and to the sacred Shiite-controlled cities in the South.

The resulting film goes beyond first impressions to address infrastructure issues, electricity, gas lines and traffic, the security situation and Shiites vs. Sunnis. Viewers are introduced to an Apache Troop, meet soldiers and tour an Abrams tank and go inside a Civil Defense Training School. An American soldier in an Iraqi classroom tells the young men before him, “You will be able to give me at least five reasons why torture is unnecessary, unethical and illegal.”

The film also addresses the ongoing issue of Iraq’s poverty and other pressing concerns that often outweigh the war on terror.

“The Iraqi people know they are not speaking about power,” says one Iraqi woman. “You know why? Because there are other problems which make them forget the power.”

Shiley strives to equally balance the developing relationships between the Iraqis and Americans, and says his film is nonpolitical and unbiased. “Americans deserve to see more of Iraq than car bombings and press conferences,” he says. 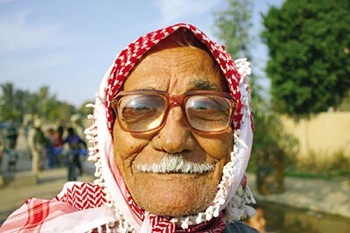 “I am Mike Shiley. I am not a reporter,” he says in the trailer for his newest documentary. “I am a filmmaker purely by accident. But somehow I managed to get myself credentialed as a journalist and sneak into the country of Iraq and film what I think is a very interesting look into that country, meeting people that you’ve never met before, covering things that are untold and seeing events that you’ve never seen.”

‘Inside Iraq’ gives everyone that opportunity.