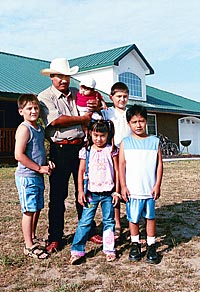 When a tornado ripped off the roof of Tony Vasquez’ home in Jackson, Neb., in August 2001, the Red Cross helped his family get back on their feet.

Tony Vasquez quickly realized the importance of the American Red Cross when an F2 tornado slammed into his home on Aug. 17, 2001, as it cut a diagonal swath of destruction through Jackson, Neb.

Vasquez’s wife and four small children were home inside the house when the tornado struck around 5:45 p.m. that evening. “They took cover underneath the house inside the foundation area,” says Vasquez, who had not yet returned from work. “The house lifted up, then flew off the foundation.”

While the tornado caused no serious injuries, the twister demolished roofs and blew houses from their foundations, causing extensive damage to the historic public school, one commercial building, several homes and a local church. The Vasquez family was hit particularly hard, but the Red Cross’s intervention made their transition through the ordeal far less traumatic.

Vasquez’s wife, Anna, suffered a broken leg and spent time in the hospital, an expense the Red Cross helped cover. They also put the family up in a rental home and provided needed clothing.

“They are good people and were there to help,” says Vasquez, who has since replaced his home in Jackson. “They do what they have to do to help us start again.”

Now the Red Cross’s ability to help others is threatened as its relief fund budget dwindles nationally and in Siouxland, where the organization provides aid services to 10 Iowa counties and a county each in Nebraska and South Dakota. Known for providing assistance to more than 600,000 disaster victims each year, the organization now is in need of its own financial assistance as dollars from its Disaster Relief Fund have reached an epic low.

A “safe” amount in the organization’s national fund is $56 million, especially with disaster-prone seasons fast approaching. On June 30, however, the relief fund hit its lowest point in 11 years with a balance of only $1.5 million.

“If you think about the Disaster Relief Fund as a tank of gas, we are literally running on fumes,” said Marsha Evans, President and CEO of the American Red Cross. “Now, more than ever, we are relying on the American people to donate the funds that make it possible for us to help those in need.”

Richard (Doc) Zortman, public relations and financial development director of the Siouxland area chapter, says the Red Cross is facing a financial crisis that could threaten its ability to provide life-saving services upon which Americans have come to depend.

Calling on a ‘hero’

It was that type of concern that led Zortman, a former Navy journalist and photographer, to approach Navy Lt. Shane Osborn about the possibility of an area fund-raiser honoring local Siouxland ‘heroes.’ Osborn, a Norfolk, Neb., native born in South Dakota, commanded the downed EP-3 reconnaissance plane that Chinese fighters intercepted on April 1, 2001. Osborn and 23 crew members spent 11 days under intense interrogation before their release to the U.S. government.

“He said he’d love to help,” says Zortman, who then worked directly with Osborn to coordinate a two-day event that features a book signing, ArtSplash silent auction, a pre-dinner reception and Hero Awards banquet as well as a golf outing on Monday. Osborn is doing all events on his time and at his cost, including Sunday’s book signing, where profits will be donated to the local Red Cross chapter. 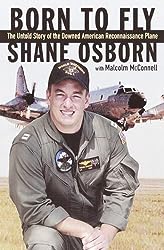 For Osborn, attending the event was a given.

“They do so much for people all over the world, here at home and abroad,” he says. “They’re a selfless organization that is dedicated to helping people out when they’re in their worst positions. No one ever hopes they have to use the Red Cross, but those that do are glad it’s there.”

“They furnished families that needed it enough money for a place to stay and a couple hundred dollars for a clothing allowance, which was very generous,” says Jackson mayor Brian O’Neill, who has presided over his community for the past 14 years. “They brought all the water and pop and Gatorade and a food wagon. They also set up a drop-off point where people could donate clothing — just all the bare necessities that people need right away.”

Zortman says that despite the attention that large disasters receive, many people do not realize that it is the smaller, “silent disasters,” such as single house fires that steadily drain local Red Cross funds. Often unreported in the national media, the events go unnoticed and therefore do not generate financial contributions. And, because they are not a federal agency, the Red Cross receives no funding from the government.

The Siouxland area chapter is staffed by only seven people; the rest are volunteers, many of whom responded to the Sept. 11 disaster and spent several weeks in New York volunteering needed services.

Though many people associate the Red Cross with blood, the Siouxland chapter is not involved with those services. Mobile units — such as the Siouxland Blood Bank — have fleets strategically placed to serve specific counties. Siouxland’s Red Cross, says Zortman, is more of a “disaster preparedness chapter.” And, on a local level, their lack of funds translates into having to choose some services over others.

“It becomes a question of distribution of funds,” Zortman says. “We provide health and safety classes — including the distribution of defibrillators and training for their use — and disaster services that include rent, clothing, food and even eyeglasses. And though there’s little warning about terrorism, the Red Cross should be prepared for terrorist acts; it becomes problematic when disaster funds are low.”

Osborn says many people don’t realize how badly the Red Cross is hurting or how low donations are, something he attributes to the lagging economy.

“I think it has more to do with the economy right now and the war causing the slowdown,” he says. “People are hurting all over the country.”

He hopes his visit to Sioux City will help jump-start interest in the Red Cross and appreciation for services they provide to surrounding areas.

“I grew up right near there — 60 to 70 miles from [Sioux City] — so you’re helping the people that are nearest and dearest to me,” Osborn says of the Siouxland chapter.

Jackson mayor O’Neill echoes that sentiment. “There couldn’t have been any better help,” he says of the local Red Cross. “They took care of us very well for a couple of weeks solid. They never left.”

Siouxland also is the area in which Osborn wants to return. With less than two years left in the Navy, he plans to move back to the Midwest where he can raise his family. “[The Red Cross] is an important organization and we need to keep it strong and going so if we do have something happen — Lord forbid — they are there for us.”