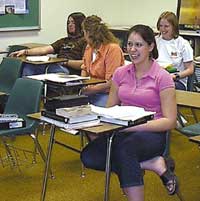 This photo shows a classroom at West Monona High School in Onawa, Iowa. Enrollment in the district has dropped from 1,100 students to 714 in less than a quarter-century.

EDITOR’S NOTE: This is the second part of Journal correspondent Jody Ewing’s series on Monona County, the only county in Iowa with more people over the age of 65 than under age 17. This part focuses on possible solutions to this population trend. They involve education and economic development.

ONAWA, Iowa — In less than a quarter-century, the West Monona Community School District has seen its enrollment drop from 1,100 students to 714. Though West Monona’s enrollment over the years has decreased 36 percent, no programs or co-curricular activities have been cut.

In fact, the school has been adding.

The summer of 2001 witnessed the opening of a new middle school wing attached to the high school, a $1.4 million dollar effort complete with a new ICN room and a multipurpose facility.

The school districthas 61 teachers and 40 other staff members, with an average student-teacher ratio of 12 to 1. It also defies the odds of graduates returning to Monona County.

“We have 22 Morningside College graduates who work for the school system,” said Stanton.

In a news conference last month in Des Moines, Senate Democratic Leader Mike Gronstal discussed the results of the Web-based survey sent in March to 351 Iowa school districts. The survey asked school superintendents how they were dealing with cuts in education and what response their district would consider next year.

“Iowa’s educators are clearly and emphatically telling the Legislature that enough is enough,” Gronstal said. “It is time to stop cutting educational opportunities for Iowa children.”

Iowa lawmakers did pass a 4 percent allowable growth package for 2005, which comes on the heels of a 2 percent growth package this year. However, both occur after cuts which have taken place since 2001 (a $78 million cut that year).

Myron Ballain, Whiting Community School District superintendent, reported that four employees will be laid off and the district’s instrumental music position and vocal music position will be combined into one position. The elementary computer lab, which provides support instruction for K-6 reading and math, will be eliminated.

Delayed purchases for the school district include textbooks for all courses, computers, printers, sewing machines and cooking equipment for consumer education courses, and replacement saws and tools for industrial arts.

“Legislators had best be prepared for the backlash from parents and communities when they discover that the crisis was created via lack of leadership and foresight on the part of our Iowa legislators,” said Ballain, now in his second year serving the Monona County school.

Among those employed in the county, 28.6 percent are in management, professional or related occupations. Sales and office positions account for 24.9 percent and service occupations total 17.1 percent. Rounding out the work force is construction and maintenance work (12.4 percent), and production and transportation (15.2 percent). Trailing the others are farming, fishing and forestry occupations, accounting for 1.9 percent of Monona County workers.

“The wealth here has always been agriculture,” said Charles Hitchman III, president of Blencoe State Bank. “We need to look past that as part of a new wealth. We have to look at something other than agriculture.”

The Monona County Courthouse in Onawa employs 125, the majority in county government positions with a few reimbursed through the state.

“It’s cyclical here,” said Hitchman. “We’ve lost a lot of businesses in the past five years or so. The airport took about 18 jobs, and 10 or so when Cargill closed. Every time we lose a company or business, it cuts down on groceries bought and other funds normally going back into the county.”

At the “Imagine Iowa” conference in Ames, former state economist Harvey Siegelman said that Iowa’s fastest growing industries are “in insurance and finance, and in hospitality and recreation.” Neither of those, he said, are what we’d think of as traditional growth industries in Iowa.

Hitchman, who served 10 years on the county’s economic development board, said it tried to lure several businesses to the area, but failed.

“We hired a full-time director to go out and promote this area and try to get them here,” he said. “We got contributions from all the cities and the county and still were unsuccessful.”

“We were too far away,” Hitchman said, adding that it didn’t make sense. “We have a rail here for distributors, which one day will be a double rail, and have interstate two miles from the rail. We also have the (Missouri) River.”

Other factors point to fields of opportunities. Morgan Quitno Press’ Most Livable State Award ranked Iowa as No. 2 in 2003. MQP bases the rankings on 43 statistical indicators that reflect the kind of lifestyle that most Americans agree is positive: Affordable housing, safe streets, good employment opportunities, a strong education system and a healthy state economy.

The North American Business Cost Review in its 2002 addition ranked Iowa fifth in the lowest cost of doing business.

The Downtown/Exterior Facade Program offers a $2,500 matching grant and loan to downtown businesses that improve the exterior or facade of their business. Other programs include a cash discount on utility bills for new or relocated businesses.

So what else can Monona County do?

“We can start with warehouse type work, and give concessions to new businesses like the new tile business in Onawa,” said Hitchman. “Monona County needs someone dynamic to head up and promote Monona County. It would be a full-time occupation, and they’d need to travel and find factories and jobs willing to relocate here. Their salary would be more than compensated by the additional jobs created and those salaries coming back into Monona County.”