Concept releases books ‘into the wild’ 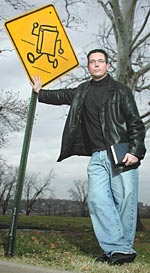 Courtesy Photo
After BookCrossing founder Ron Hornbaker came up with the idea for a random book exchange, it took just hours before he had the web address, a logo and a plan on paper. More information at: bookcrossing.com

Some call it fate. Some call it karma. Whatever you want to call it, it’s that remarkable chain of events that occurs between two or more lives and one piece of literature. It also is the premise behind BookCrossing.com, an online site where members register books and release them “into the wild,” then follow the books’ journeys and the lives they happen to touch. According to National Public Radio, the trend has people committing “random acts of kindness.”

Conceived by Ron Hornbaker of Kansas City, Mo., the idea took root in March 2001 as he and his wife Kaori were admiring PhotoTag.org, a site that tracks disposable cameras loosed into the wild. Hornbaker – President and CTO of the software company Humankind Systems, Inc. – wondered what other items people might enjoy tracking and quickly found the answer in his own full bookshelf. Three hours later he had decided on the name, registered the domain, and Kaori already had sketched the running book logo on a crossing sign.

“I guess you could say it’s the karma of literature,” says Hornbaker, who credits the site to his parents – both schoolteachers – who taught him the joy of reading at a very early age. “Releasing your books ‘into the wild’ and tracking their progress and the lives they touch is just more fascinating, and more fulfilling, than hoarding them on a shelf somewhere.”

The procedure for releasing a book is simple. ‘BookCrossers’ register a book by going to the website, entering the book’s ISBN (a tracking number for all printed books) and getting a unique BCID (BookCrossing ID number).

The number is copied on a label inside the cover along with the website address, then released ‘into the wild’ by being left on airplanes, park benches, or wherever the bookcrosser prefers. People who ‘catch’ a wild book follow the instructions on the label by visiting the website to see where the book has been and to make a new journal entry.

“Sharing books with your friends and neighbors is a natural instinct. What we’ve done is created a tracking database so that you can see where your books are, and read the journal entries along the way,” Hornbaker says.

BookCrossers hail from over 130 countries – from Antarctica to Zimbabwe – the U.S. leading with more than 69,000 members. Iowa currently has more than 600 members, with locations ranging from Sioux City and LeMars to Ames and Iowa City. While some conservative BookCrossers release locally or give to friends, the more adventuresome combine interplay of distance and fate.

A Spirit Lake member recently left Nora Roberts’ “The Villa,” in the ladies room at the local “Dynos,” while a member from Gainesville, Fla., left Sharyn McCrumb’s “The Songcatcher” at a Red Barn Rest Stop somewhere in “Iowa USA.” John Grisham’s “The Client,” left in Firenze, Tascana, Italy, got picked up by a member who responded at BookCrossing with the entry, “I hunted this book and catched it on a post office table!”

• Visit bookcrossing.comto register as a member.
• Register any book and get a unique BCID (BookCrossing ID number), and record any journal comments.
• Label the book (labels provided online) or write the ID number inside the book along with the website address.
• Release the book (to a friend, leave it on a park bench, etc.) and get notified by e-mail each time someone finds and records entries for that book.
• If you make “Release Notes” on the book, others can go hunting and try to find it.

Any initial skepticism – that ‘giving away free books’ might hurt authors or publishing sales – vanished as the site promoted reading, discussion and the purchasing of titles.

“BookCrossing is just the kind of audience needed to jump-start a title’s sales,” says Hornbaker, whose site has several programs to help authors and publishers promote their books. “The BookCrossing website receives tremendous traffic…and most all of those eyeballs belong to book buyers.”

Though BookCrossers’ personal identities remain private, the ‘Community’ offers a forum for online discussion and an ‘Official Crossing Zone,’ where members meet up locally in a face-to-face setting.

Hornbaker says the company’s goals for the future are the development of K-12 classroom projects and creating public library programs where readers of library books can read journal entries of others who read the same book.

“Just think,” says Hornbaker. “Books are forever – people don’t throw them away. A hundred years from now, your great-great-grandchild might open a book, find a website address with a BookCrossing ID number, and go read a journal entry that you wrote. How cool is that?”

This article first appeared in the Weekender on January 30, 2003.