By Jody Ewing
Journal Correspondent
May 23, 2004 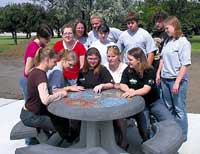 Top, art teacher Cheré Fox-O’Reilly and Hand and Spirit’s Al Hedstrom gather with West Monona students around one of the tables they designed in memory of their late classmate, Andrew Merritt. (Photo by Jody Ewing)

ONAWA, Iowa — Students and faculty at West Monona High School will never forget Andrew Merritt. The spirited 17-year-old loved hunting, fishing, soccer and baseball, but most of all the outdoors.

When he died July 5, 2003 from injuries suffered in an automobile accident, grieving friends and family joined together at an overflowing church memorial service that barely left standing room.

Their love for a young man who treasured the earth and sky will now live on through future generations in a new memorial courtyard and amphitheater being built at the school where Andrew would have graduated today.

“We wanted to do something in Andrew’s memory, but a scholarship just didn’t seem quite right because he never was much into academics and was such an outdoor person,” said Andrew’s father, Richard Merritt, who along with his wife, Petrina, donated the materials and labor. “We went to the school board to see what they wanted or needed, and they’d wanted something like this for some time so we decided to do it.”

Nearly 150 students, faculty, friends and family members turned out Friday for a dedication ceremony for the partially finished project.

Located on the school’s northwest side, the courtyard consists of six concrete tables embedded with tile mosaics, a hand-designed birdbath and a statue of two cherubs crowned by an arch — all delivered and put into place within the past seven days. The concrete amphitheater is being constructed on the courtyard’s north side. Hand-made bricks engraved by seniors lay before the cherubs in a loving tribute to their departed classmate.

For the casting of tables and statues, Richard and Petrina contacted Denison resident Al Hedstrom, owner of “Hand and Spirit, Inc.,” a cast stone and architectural pre-cast business located in Onawa. The couple had ordered a table from him after their son’s death and asked if he’d work with Andrews’s classmates on customizing the tables. Though Hedstrom never had embedded tiled mosaics before, he agreed to work with the students.

Under the direction of art teacher Cheré Fox-O’Reilly, they drew separate mosaics for each table with themes reflecting Andrew’s life. They finished the drawings within three weeks and took turns working with Hedstrom on color for moldings and putting the mosaics in place. They were able to complete one table each day.

“The art kids would tape the design in the bottom of the mold with double-sided sticky tape,” Hedstrom said in an emotional address to Friday’s crowd. “I had so much fun working with the kids. I don’t know why I’m crying.”

As a personal gift to Andrew — known as “Big A” to his friends — Hedstrom made and donated the birdbath with a big blue “A” on the bottom.

The tables will require a bit more sanding and then be resealed to give students a fine writing surface. In minute ceramic tiles embedded in the center, one table depicts Andrew’s love of hunting with pictures of a deer, duck and pheasant. Another shows the sun, earth, a river, wind and water in a testament to his love for the outdoors. A game table includes Andrew’s date of birth and another has zodiac signs for the planets.

“The one with the earth, sun and river took the most work because of the colors and the ceramic pieces were so small,” says junior Wendi Kluver. “It also was hard because [those symbols] held the most meaning for him.”

The work done by hand is fitting, says Merritt, a Monona County supervisor, since Andrew loved to work with his hands and already had a hand in the family business, Merritts Pumping Service and Portable Restrooms.

“Andrew’s favorite saying was, ‘If you find our port-a-pots clean it’s because we had a hand in it,'” Merritt says. “He had planned to take over the business.”

Also present was Andrew’s best friend Gabriel Moore, a passenger in the vehicle who survived but required extensive hospitalization, and who also still works in the Merritt family business.

“Gabe is doing very well now,” said his father Todd Moore of Onawa. “For quite a while he suffered over this, but he had a lot of support at the house.”

“The class of 2004 did the cherub and it says ‘Friends Forever,'” said Petrina, whose co-workers from Sioux City’s 185th civil engineering unit also helped with part of the work. “I think that sums up the students’ commitment to this project, that they will be friends forever.”

Petrina’s sister, Jackie Phipps, traveled from Minneapolis with her children and a family friend in order to attend the dedication.

“In looking at all of this, it restores your faith in humanity,” Phipps said of the students’ hard work. “It gives us hope for this next generation.”

Student Celina Carpenter said that working on the tables, “taught us a lot about ourselves.”

“Toward the end it became more real,” said the West Monona senior. “We got in touch with the idea that it wasn’t just supposed to be fun, but be done how [Andrew] would have liked it.”

High school principal LuAnn Richardson expressed her gratitude for what Richard and Petrina have done for both the school and the community.

As they addressed the crowd together, Richard and Petrina thanked the community for all they’d done and for the unwavering support from family and friends that helped them get through the past year.

“This has been a tough year for us,” said Petrina. “The kids have helped us get through a very difficult time.”

Richard challenged both students and teachers to use the facility and have fun.

“Watching all the kids working was like watching ants running around here,” he said. “But we don’t just want to remember Andrew. We need to remember other kids we’ve lost, too. We want that to go on.”

While high school seniors and faculty held big green balloons stating “Class of 2004,” the crowd grew quiet as the song, “Angels Among Us” filled the warm morning air. When the song finished, students and staff released their balloons.

As his eyes followed them into the sky, Richard smiled and said, “As Andrew would say, ‘let’s have fun now.'”