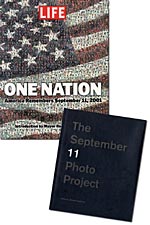 Nowhere more than in a bookstore is the message clearer: Americans will not forget Sept. 11, 2001.

More than 100 books about terrorists, survivors, rescue workers and victims now dot the shelves of book stores everywhere. There are picture books, historical examinations and those that measure the cumulative impact on society and our world. All serve as reminders of what many carry every day – that lives have been altered forever.

As the first anniversary of Sept. 11 approaches, we look back through the pages of a year marked with sadness and hope, heroism and loss.

Vickie Hassenger, owner of Book People at Marketplace Shopping Centre, says she finds the 9-11 books a memorial to all involved.

“It’s something we need to remember, and it’s an important part of our history,” she says. “It’s something that happened in the United States and people want a record of it for the future, and for future generations.”

The photography book “One Nation” by Time-Life sold very well at Book People, as did other photo histories such as “The September 11 Photo Project” edited by Michael Feldschuh.

One of Hassenger’s favorites is Andrews McMeel Publishing’s “September 11, 2001,” a collection of 150 headlines and front pages of major newspapers throughout the world.

Yet how people choose to remember varies as much as the number of titles in print. One recent bestseller is “Let’s Roll” by Lisa Beamer, whose husband helped lead passengers in a confrontation with terrorists on United Flight 93.

“It’s been a huge seller,” says Laura Sullivan, manager of Waldenbooks at Southern Hills Mall. “Lisa’s book is about her husband and the aftermath of what happened.”

The book is selling well, Sullivan says, because people are interested in how others survived the event.

“They’re not as concerned about the terrorists and the wars and what’s been happening as they are about the people,” says Sullivan. “They want to know the human interest, the people that survived it, or the people who lost loved ones in the World Trade Center or on a plane.”

Another book about Flight 93 – “Among the Heroes” by Jere Longman – also is selling well, according to Kate Smith, assistant manager at B. Dalton Booksellers in the Southern Hills Mall.

All three bookstores have special displays now through the 9-11 anniversary, which feature children’s books as well as those for adults.

“The ones for children usually deal with the grief and trying to understand it,” says Smith, whose store will keep a display up until Sept. 15. “There is also a couple of them for children that are in remembrance of the firefighters.”

The New York Times’  “A Nation Challenged,” gives a visual history of 9-11 and its aftermath, and also comes in both an adult and youth version. One of the most recent to hit stores is CBS News’ “What We Saw,” which comes with a DVD featuring news coverage of Sept. 11.

Though their presence often reopens old wounds, booksellers agree that publishers have been judicious in preserving a segment in history.

“I think it really does open old wounds,” says Sullivan. “When I’m re-looking at the books I can feel the anxiety growing again, but I think it’s good to keep everybody’s awareness of it. It brings to life the impact of what happened.”

Hassenger agrees. “I’m not sure that it ever goes away,” she says. “It was just such a shock to lose someone that way.”

“I think some people need something to remember it by,” says Smith. “I’ve had people who buy things they are going to give to their grandchildren. It’s like when people would save newspapers from World War II.”

Hassenger says it is interesting to read about people’s perspectives along with those of the news media.

“It’s just so unthinkable that this happened to these peoples’ lives, unsuspecting,” she says. “You wake up one morning and go to work and your whole world falls apart. And it touched so many lives besides the families. It makes us realize how vulnerable we really are.”