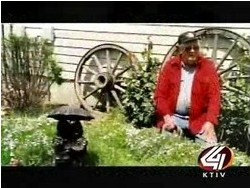 An Onawa, Iowa man is still struggling to stay alive, two days after a house explosion nearly killed him.

Now, that man’s family wants an answer, to who cut the propane line in his father’s home.

Over 40% [sic, was 80%] of Earl Thelander’s body was burned in Tuesday’s explosion. He went through three hours of skin graft surgery today.

We’re learning more about the minutes leading up to that powerful propane blast, as the search for clues to this bizarre crime, continues.

Someone broke into Earl Thelander’s basement Tuesday morning, came away with $10 worth of copper tubing, and left him with a dangerous problem, a gas leak. The 80 year old man opened the windows to air out his home, and left.

“He called me back at quarter to 11. Apparently at that time, he was headed back out to the house,” remembers Brad.

Thelander thought the air was clear and plugged in a fan, but then… “He said I’ve never seen a fireball that big,” says Brad.

Thelander quickly crawled out of the house, and tried to use his cell phone to call for help.

“But it was inoperative at that point, and there was no one else there. So, he got in the pick-up and drove home,” explains his son.

Thirty minutes later the 80 year old checked into the local hospital, with his body burned to the bone.

“Tonight we’re just hoping that his kidneys and his lungs keep functioning. You know it’s definitely a struggle at this point,” Brad explains.

Monona County Sheriff Jeff Pratt says, “We have seen an influx in the counties to the south of us, stealing of copper wire and tubing, and they’re reselling that, at this point we don’t know where.”

To Brad Thelander, stealing a piece of copper is not worth a life, especially not a loved one.

“He’s gonna be in a lot of pain if he lives through it. For this, to put something like this on a man’s life it’s sad that something has to do that. For ten bucks, I’d a given them ten bucks to keep my dad around,” says Brad.

Without any physical evidence or witnesses Sheriff Pratt says this is a very hard crime to solve.

If you saw or heard anything about the copper robbery you’re asked to call the Monona County Sheriff’s Department at 1-800-859-1414.

Authorities say you can protect your home from copper crimes the same way you protect it for any other burglary.

Lock your doors, install security lights, make it look like somebody’s home, and keep your eyes out for your neighbors too.