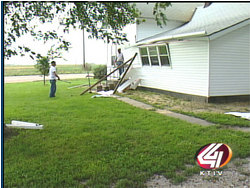 A rural Monona County, Iowa, home is heavily damaged by an explosion that police say is tied to an early-morning break-in.

The county sheriff says his deputies got the call at about 12:30 Tuesday afternoon. 80-year-old Earl Thelander was in the home trying to vent propane fumes when the explosion happened in the home’s basement.

Thelander sustained burns, but was able to drive himself home where his wife rushed him to Burgess Medical Center, in Onawa.

Deputies say the cause of the explosion is being attributed to a cut propane line on a furnace in the basement. The sheriff was actually called to the residence earlier in the day for the report of theft and vandalism. Investigators say someone broke into Thelander’s home and stole copper tubing water lines… and tried to steal the copper propane line. “That gas had built up at the floor levels and propane is heavier than air so it laid down on that floor and something ignited it pretty good,” said Jeff Sander, Fire Chief. “It did some pretty good damage to the home.”

Thelander’s family calls his survival a “miracle.” “Its just devastating to the whole family, but its just a miracle that more people weren’t hurt,” said Carol Otto, Sister-In-Law.

Thelander was flown to an Omaha, Nebraska, Burn Center. There’s no word on his condition.