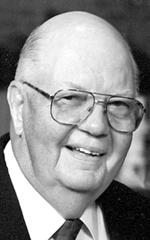 ONAWA, Iowa — Earl Thelander, 80, of Onawa passed away Saturday, Sept. 1, 2007, at Clarkson Hospital in Omaha from burns sustained earlier in the week from a propane explosion at one of his rental properties.

Services will be 10:30 a.m. Thursday at First Christian Church in Onawa. Graveside services will be at a later date. Visitation will be 5 to 8 p.m. Wednesday, with a celebration of life service at 7 p.m., at Rush Family Care Service in Onawa.

Earl was born May 9, 1927, in Arcadia, Neb., the son of Henry and Amanda (Gestrine) Thelander. He grew up in Polk, Neb. He graduated in Stromsburg, Neb., in 1944. After graduation, he went into the U.S. Coast Guard. After his discharge, he began farming and farmed for several years.

On Feb. 3, 1950, he married Berniece Obrist and to this union six children were born. They lived and farmed in the Osceola area until he began working for Mamco Manufacturing Company in Stromsburg. He later transferred to Honeggars Manufacturing Company in Onawa. After they closed, he went to work for Onawa Propane and in 1967, started his own business, Thelander’s Plumbing and Heating in Onawa. He was blessed to have his entire family involved in the business.

On Dec. 30, 1982, he married Hope Ewing in Onawa. They lived in Onawa, where he enjoyed doing yard work, gardening, watching the birds and squirrels on his back deck and his “coffee time.” The couple owned and operated Thelander’s Softener Service and Thelander’s Rentals. They owned the Monona Hotel and the Park Hotel and many other rental properties over the years.

He was a member of First Christian Church of Onawa and helped with Boy Scouts, when his sons were younger. He enjoyed spending time with his family and was also loved by the entire community. He will be greatly missed by everyone.

He was preceded in death by his parents; a grandson, Bobby Gray; his father-in-law, Raymond Archer; a sister-in-law, June Ooten; and three brothers-in-law, Hal Gordon, Glenn Twarling and Dan VanWinkel.