An 80-year-old Onawa, Iowa, man remained in critical condition Thursday with burns suffered in an explosion that occurred after metal thieves stealing copper pipes cut a propane line in the basement of a house he owned. 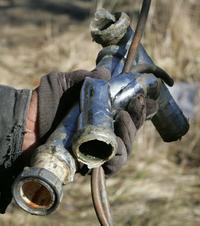 Earl Thelander was hospitalized at Nebraska Medical Center in Omaha with second- and third-degree burns suffered in the blast.

“Realistically, looking at his age and severity of the injuries, this is just a tough, tough fight,” said his son Doug Thelander. “A good man is going through a lot of pain for nothing.”

Thieves seeking a quick buck from rising scrap metal prices have been stealing copper wire and pipe from abandoned homes, buildings under construction, churches and vehicles all summer.

On Tuesday, they hit the empty house owned by Earl Thelander, which he was preparing to sell. Thelander went to the house after learning that the thieves had removed copper tubing water lines and tried to steal the copper propane line.

“They cut it a foot above the furnace,” Doug Thelander said. “Why would they do that? They could have turned the gas off.”

The damaged line caused propane to leak into the basement, and authorities said Thelander triggered the explosion when he plugged in an electric fan to air out the basement.

Doug Thelander said his father used to be in the heating and air conditioning business and wasn’t “an old guy puttering around in the basement.”

He said he talked to his dad just before he was transported to Omaha.

Before Thelander entered the home, police and sheriff’s officials had already been in the house to investigate.

“We never should have been in there,” said Onawa Assistant Police Chief Joe Farrens. “The fumes were really strong.”

Authorities said the house suffered considerable structural damage. The case remains under investigation, but authorities didn’t have any leads as of Thursday.

“I appreciate all that is being done,” he said. “We’ll do anything in our power to find out who is responsible for this.”

Metal has been a popular target for thieves trying to take advantage of scrap prices.

In June, someone took copper pipes from Omaha’s Shiloh Baptist Church, disabling its air conditioners. About a week earlier, several Omaha Public Schools vans were damaged when catalytic converters were taken for their platinum.

While metal theft in western Douglas County appears to have slowed, authorities said, western Iowa hasn’t been as lucky.

Thieves have taken wire from cell phone towers, metal from along railroad tracks, air conditioners and even parts of center pivot irrigation systems on farms.

“They’ll steal anything they can get. If there’s nobody around, people aren’t going to see the theft,” Danker said.

Danker said businesses should consider using fences and cameras to better protect property. Individuals, he said, should try to keep their property where they can see it and where potential thieves can’t.

“Keep them from seeing it from the road,” he said.

Anyone with information on the case is asked to call the Monona County Sheriff’s Office at 800-859-1414.