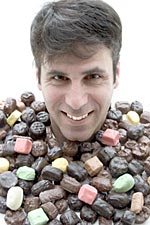 10. Heath Bar
The only thing better than butter toffee is butter toffee enrobed in milk chocolate.
9. Big Hunk
A comely slab of chewy vanilla nougat, shot through with fried peanuts. If you love the flavor of cake batter, the Hunk is your dreamboat.
8. Snickers
America’s top selling candy bar also happens to be one of its best. The key is an exquisite nougat, which has a hint of cinnamon flavor.
7. Twin Bing
Narrowly beats out the Idaho Spud as the strangest candy bar still in production. A cherry cream surrounded by a lump (and we do mean lump) of chocolate and ground peanuts.
6. Five Star Bar Hazelnut
This gourmet bar combines crushed hazelnuts, Belgian chocolate, and feuilletine, a crushed pastry that lends the bar its addictive texture.
5. Hershey’s Cookies ‘N Mint
Hershey committed a crime against mint lovers when they discontinued this sublime bar.
4. Raisinets
Finally, a raisin d’etre for the common raisin.
3. Sifer’s Valomilk
A rich vanilla syrup in a creamy chocolate cup, this confection is built to spill. Your tongue (and your dry cleaner) will thank you.
2. Kit Kat Dark
The bittersweet coating tastes like a fine chocolate pudding, with hints of French Roast. Devotees have been known to drive across state lines in pursuit of this limited edition.
1. The Caravelle
Ladies and gentlemen, the greatest candy bar you’ve never tasted. The Caravelle, sadly extinct, boasted the same ingredients as the 100 Grand – caramel, crisped rice, milk chocolate – but was approximately 100 times better. To be mathematically precise, then, a 10 Million Dollar Bar.

Do you remember the first candy bar you ever ate? Chances are, you probably remember the store where you bought it and even how much it cost.

Mine was a 5-cent “Bing” — purchased at the corner Simmons’ Market in downtown Onawa. I remember the store’s shiny hardwood floors and my father giving me a dollar to go there and get some “nibblin’ stock.”

The market is long since gone and the Bing has been replaced by the red-foil wrapped Twin Bing. But I do remember. 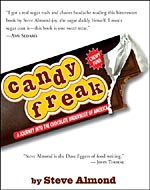 According to author Steve Almond, author of “Candyfreak : A Journey through the Chocolate Underbelly of America,” that’s because candy plays a huge role in the psychological lives of kids.

“Candy is deep,” said Almond in a phone interview from his home in Massachusetts. “People have a very powerful relationship to candy. To kids, it’s the sex, drugs, and rock and roll of childhood. But it’s not just a kid thing. It’s a primal, emotional and psychological factor in a person’s life.”

Candyfreak is as rich in humor as it is a story about America in general. I expected a history lesson on the origins of candy. Instead I found a bittersweet story that made me laugh out loud and then forced relatives to listen as I recited my favorite pages (hint: see page 12 on Oral Fixation).

“I wanted the book to be serious but clear that it’s a fun, irreverent read,” said the 37-year-old Almond, who admits on page one that he has eaten a piece of candy every single day of his entire life. “I’m trying to take a word with a negative connotation, but say I’m proud and passionate about this. It’s an irreverent obsession.”

And, says Almond — a fiction and non-fiction creative writing teacher at Boston College — obsessive writing is the best kind of writing.

Obsessed by the disappearance of the luscious Caravelle bar, the perfectly balanced Hershey’s Cookies ‘n Mint, the Bit-O-Choc and the Kit Kat Dark, Almond embarked on a nationwide journey to uncover the truth about the candy business. There he found an industry ruled by conglomerates such as Nestlé, Hershey’s and Mars.

Visiting candy factories that produce the Twin Bing, the Idaho Spud, the Goo Goo Cluster, the Valomilk and a dozen other quirky bars, he found that the world of candy is no longer a sweet haven. Today’s few regional candy makers mount daily battles against paranoia and corporate greed in America’s compulsion to crush the little guy.

“It’s difficult for a hard-working regular company to compete with the Big Three,” said Almond, who devotes an entire chapter to Sioux City’s Palmer Candy Company and president Marty Palmer’s production of the Twin Bing. “Marty Palmer has had to be incredibly industrious. He realized he couldn’t survive on just Twin Bings and he makes other products like coated pretzels and peanut clusters. He’s an amazing business person and one of the most clever people I know.”

Almond says people are fascinated and enchanted with the Twin Bing, which is said to be the largest handmade candy bar left in America.

“The book is partly about regional identity, and this gem of a candy company is right in town,” he says of the Sioux City company. “People may not realize what a rare, precious thing we have here, and it’s right in our own town. It’s the last of a dying breed.”

In a theme running parallel to the demise of candy bars and their companies, Almond also praises Palmer — a fifth-generation candy maker who earned degrees in engineering and business and returned to Iowa to take over the family business — for his sense of responsibility toward the 100 workers he employs. As Almond writes in his book:

He had no delusions about the future. “It would be neat to have a sixth generation,” he said, gazing at the fleet of gantry cranes that loomed over his downtown. “But you never know what kids will want to do.” It seemed to me, in that moment, that Marty Palmer was straddling the two worlds that compose our lives, the past and the present, with tremendous grace.

Candyfreak is available at all major booksellers. For more information, or to tell your own freak story about candy, visit www.stevenalmond.com.