To the Beat of a Different Drummer: 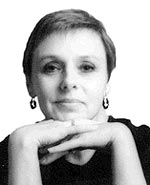 People often go to great lengths to keep secrets – they lie, become evasive, or masquerade a truth by outwardly displaying the opposite of what they feel. Secrets become more frightening when admitting they exist means risking being cast as peculiar.

Author Gwyn Hyman Rubio brings this issue to the fore with a child’s-eye look from the inside out on how it feels to be dissimilar in a uniform society.

,” Rubio’s first novel and the March, 2001 Oprah Book Club pick, tells the story of 10-year-old Icy Sparks, a bright and curious child who begins to croak, pop her eyes, and experience other unexplained symptoms. Set in Eastern Kentucky in 1956, Icy’s behavior is the source of mystery, confusion and deep humiliation.

As an adult, Icy discovers she suffers from Tourette Syndrome, a rare neurological disorder characterized by tics – involuntary movements or vocalizations that occur repeatedly in the same way. Narrated by an adult, Icy looking back, the story captures not just the challenges of being an outcast but the struggles one goes through in a seemingly endless search for answers.

Rubio, who does not suffer from Tourette Syndrome (TS) herself, grew up with epilepsy, another neurological disorder. She says she wanted to write a book about a child who felt different.

“I grew up in south Georgia, and had epilepsy as a child,” Rubio said from her home in Kentucky, her home for the past 23 years. “People thought it was strange behavior for a child, but I was actually having small seizures. It wasn’t diagnosed until I was in my 30s.”

She wanted to write a story about a little girl who didn’t fit in, but wasn’t quite sure what problem to give the girl. Then she ran across the essay “The Man Who Mistook His Wife for a Hat,” written by the renowned Dr. Oliver Sacks.

“It was about a man with Tourette Syndrome,” Rubio said. “It talked about how creative art heals him, and I thought it was a good metaphor – the healing power of art. I thought at the time that I would use Tourette Syndrome as a metaphor for people who are different.”

Shortly after reading the essay, Rubio learned that the Tourette Syndrome Association (TSA) was holding a conference in Lexington, Ky., a mere hour from where she lived. She decided to attend. When a surgeon gave a speech about how his tics stopped when he entered the operating room and the healing power of creating, she knew it was a sign. She had to write the book.

Still, the little girl didn’t have a name. Then one day, while walking through the cemetery with her husband, their eyes fell on a marker named “Icy.” A few markers down, they saw “Sparks,” and her heroine was born. She began writing the novel the very next day.

Published in July 1998, the book garnered modest sales until being chosen as an Oprah book club pick for March 2001. At that point, sales soured, bringing awareness to a disorder that, even in the 21st century, is as much still misunderstood as it is often stereotyped.

There is no “typical” case of TS, as symptoms cover a spectrum from mild to quite severe. They range from eye blinking, head jerking and throat clearing to yelping, self-injurious actions and uttering words or phrases out of context. The term “involuntary” used to describe tics also is confusing since most people with TS do have some control over their symptoms.

What others may not recognize, however, is that the control or stifling of tics, which can be exercised anywhere from seconds to hours at a time, often merely postpones more severe outbursts which eventually must be expressed.

The Oprah book club discussion explored this very factor. Rubio chatted with three others on a panel, including a teacher who’d kept her disorder a secret from everyone except her husband and doctor.

“She was a French teacher, yet kept all her tics under control while she taught,” Rubio said. “She said it was like tensing up all the muscles in her body, and by the end of the day she was exhausted.”

Other co-morbid syndromes, such as Attention Deficit Hyperactivity Disorder and Obsessive Compulsive Disorder, add additional elements to a disorder, which makes it more difficult for people to comprehend. Coprolalia (profanity), while the most spectacular of the symptoms, actually is seen in only a minority (15-30 percent) of those with TS, yet often is the hallmark TS stereotype.

For Rubio’s book discussion, Oprah formatted the first half hour of her show entirely to TS awareness, showing clips from interviews of others who lived with TS, including children and former professional baseball player Jim Eisenreich.

The ex-L.A. Dodgers hitter had symptoms of TS by age 6, but didn’t know there was a name for it until he was 23, then playing for the Minnesota Twins. Eisenreich founded the Jim Eisenreich Foundation in 1996 for children with Tourette’s and has played a significant role in educating the public about the disorder.

Rubio is no stranger to dealing with special children, having worked as a preschool program coordinator while serving in Costa Rica with the Peace Corps.

She’s no stranger to writing, either. Her father, Mac Hyman, wrote the bestselling “No Time for Sergeants” in 1954 when he was only 31 years old.

“Throughout my life, I flirted with writing but never really embraced it,” Rubio said. “Not until I graduated with an MFA in Creative Writing from Warren Wilson College in North Carolina, did I decide to get serious about it.”

Rubio says “Icy Sparks” is a book that can be read at different levels, whether as a person with Tourette’s or the parent of a child who has it. Still, there is one message she hopes will shine through.

“People should embrace the part of them that’s different,” Rubio says. “It’s not something to be ashamed of. We all have parts of us that are different that we would rather keep hidden, but often, those differences bring us together more than our likenesses.”