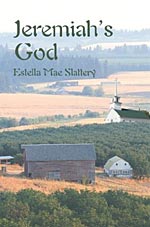 Elk Point’s Estella Mae Slattery knows her history. Born the year of the World War I armistice in 1918, she’s also lived through the Depression, World War II, Vietnam, the Cold Wars and other conflicts. Yet it is another type of conflict that led to the November publication of her second novel, “Jeremiah’s God

Set in the 1920s, the story begins when widower Jeremiah Guttermann marries a young Irish woman and brings her to his Midwestern farm. The woman brings with her a culture of superstition, which Jeremiah soon begins to believe is harmful to his two children. Though he rails against it, Jeremiah has his own spiritual hang-up — a loyalty to the folklore of an ages-old brotherhood. His failure to acknowledge the dark side of the folklore meets with tragic consequences, ultimately affecting his family’s future generations.

“The idea for the book stemmed from an incident I learned about as a child, but I didn’t understand the full complications,” said Slattery, a Beresford native and former English teacher. “Now I do.”

The mother of six living children and grandmother of 13 says she doesn’t write biographies, but rather finds an odd situation and then focuses on the aftermath.

“I’m interested in exploring superstition and the reasons for our actions, and the effects of superstition and how that carries through the generations,” Slattery says. “It’s a fascinating subject.”

Slattery says she lived with the book’s superstitions for years and had been aware of them for quite some time. After failing to find a mentor to help her with the book, she began writing it at age 75 and finished 10 years later. The result, she says, is a story written from her point of view and what she has witnessed through the years.

“The book is based on what these people believe and their practices in regards to women,” she says. “This leads to situations which, no doubt, could bring about re-examination of some old attitudes.”

As a young child, Slattery grew up in a time when there was no TV or radio. She and her friends spent much of their time at the local library, where Slattery says they attempted to “read every book of fiction there.” When she discovered Shakespeare during high school, it inspired her to get her masters degree at the University of South Dakota and become an English teacher. Yet it wasn’t until she had raised her children and retired from teaching that she decided to write a novel.

Her role as mother, grandmother, and life-long Roman Catholic afforded her many challenges and served as her inspiration, as did stories passed down from each generation.

“Reading and good literature were always all around me,” she says. “But I’ve always loved mystery stories and those that deal with superstition. I find them fascinating and entertaining.”