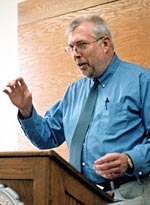 Allen’s novel was purchased, adapted, and filmed for submission to the 2003 Sundance Film Festival.

Copies of the book may be purchased at Amazon.com.

Getting a novel published – let alone having it made into a movie – can be somewhat of a crapshoot. Yet that gambling paid off for USD English Professor Edward Allen, whose novel “Mustang Sally

,” was purchased, adapted, and filmed for submission to the 2003 Sundance Film Festival.

Picked up on a three-year option by independent filmmaker Chris Iovenko, the Jim Belushi movie is being produced by the Los Angeles film production company Panopticon Films for submission to January’s festival. The Sundance Film Festival programming staff views more than 3,000 submissions each year and selects approximately 125 feature-length documentary and dramatic films and 60 shorts for presentation to an audience of more than 20,000. Here, independent producers hope to spark enough enthusiasm to get films picked up by distributors.

First published in 1992, “Mustang Sally” tells the hilarious story of one man divided between two separate lives. When English professor Packard Schmidt takes a trip to Las Vegas, he succumbs to the prostitution services of a former student and begins his steady descent into chaos.

“What I tried to convey is the comic possibilities of somebody with his feet in two very disparate and different worlds,” says Allen, who continues to teach full-time at the University of South Dakota. “The protagonist – Pack Schmidt – is an academic. He’s a teacher and an intellectual, but he also has another part of his life in gambling in Las Vegas and in that kind of world.”

“I’ve worked hard on this stuff and I’ve had a lot of fun doing it,” he says. “I just hope that the joy that I’ve had in writing comes across when people read the book or see the movie.”

Pulled between intellectual propriety and his own sexual appetite, “he gets into trouble and all hell breaks loose,” says Allen. “Anybody who has been to Las Vegas or Reno or any place like that should enjoy the book, because it celebrates that life in the weird sort of beauty of Las Vegas.”

Though the film inevitably took some liberties with the plot, Allen says his favorite scenes and the overall basic comedy remained intact. The title was changed to “Easy Six,” a crapshooting term in the glitzy world of gambling.

Founded by Robert Redford in 1981, the Sundance Institute in Sundance, Utah is dedicated to the development of artists of independent vision and the exhibition of their work. It supports and helps develop emerging screenwriters and directors of vision, and offers national and international exhibition of new, independent dramatic and documentary films.

While waiting for word from Sundance, Allen is busy putting final revisions on “Ate it Anyway,” a collection of short stories that garnered him the coveted Flannery O’Connor Award earlier this year. He flew to Atlanta last week to accept the award, which honors and publishes the work of two authors annually. He also is marketing a book of poetry that he hopes to eventually publish.

“Writing really is in my blood,” says Allen, who graduated from Goddard College in Vermont and then promptly took a 10-year hiatus. During that period he worked as a butcher, meat salesman and delivery truck driver.

“After a while I started to realize I was really uncomfortable with not having anything to do with writing,” Allen says. “I had some experiences with one job that just seemed so perfect for a novel, that I realized at that point that ‘hey, I better do this.'”

Allen returned to graduate school, earning his M.A. in 1986 and his Ph.D. in 1989 from Ohio University. That same year he published his first novel – “Straight Through the Night” – a beautiful, haunting story about working in the meat industry.

“It was really because of that experience – realizing that I’d seen a part of life that nobody had ever tried to articulate or celebrate – that I returned to graduate school,” says Allen. How does Allen find time for teaching and writing?

“As motivational speakers say, everybody has the same amount of time every day – 24 hours a day,” Allen says. “It’s my job to do both. There’s always going to be some sort of conflict, but just like I tell my students, having more time available doesn’t necessarily make one work better.”

The key, he says, is to actually enjoy the process.