Advice Columnists Still Popular as Ever 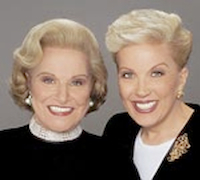 Times change, but people having problems never will.

And as long as there are people, there always will be an endless quest for advice. Personal crises continue to flourish in the lives of conflicted teens, in marriages where wives and husbands have strayed and in families where in-laws meddle in affairs.

From the lovelorn to the listless, advice is often the perfect panacea. And to whom does one turn for answers? To the preeminent authorities of no-holds-barred advice: “Dear Abby” or “Ann Landers,” who both debuted here in Sioux City. Eighty-three years later, the pleas are still pouring in, only now they grace the pages of newspapers worldwide.

Jeanne Phillips, who has co-authored the “Dear Abby” column with her mother, Pauline Phillips, since 1987, says their office receives between 5,000 and 10,000 letters every week. E-mail is printed out as well, and last week weighed in at a whopping eight pounds. Why the multitude of appeals in a day when advice is as close as one’s fingertips?

“People know and trust us because we’ve proven over the years that their questions and concerns are going to be handled with discretion and sensitivity, and maybe even compassion,” Phillips said from her office in Los Angeles. “We don’t scold people because people become defensive when you scold them and they stop listening. People also are aware that if we’re wrong, we’re going to admit it. I think that may be why the Dear Abby column is synonymous with credible advice.”

And credible advice is what keeps readers opening the paper. Gail VanWinkel of Sioux City says she has never written to either column, but that she wouldn’t hesitate if the need arose.

“I would if there was something I really had a problem with,” VanWinkel says. A motivation for picking up the pen might be family issues in general, or a problem she didn’t know how to approach. “I think they (Abby and Ann) do well as a mediator,” she says.

The Origins of Advice

Identical twins Esther Pauline Friedman, now known as Eppie Lederer or “Ann Landers,” and Pauline Esther Friedman, known as Pauline Phillips or “Dear Abby,” were born in Sioux City on July 4, 1918. Daughters of hard-working Russian immigrants, the sisters first picked up their journalistic pens as writers for Morningside College’s “Collegian Reporter” in 1936. Under the pen name “PE-EP,” they authored a gossip column entitled “The Campus Rat,” and were undaunted in their quick wit with other students.

In 1955, Esther assumed the pen name “Ann Landers” when she took over the established advice column at the Chicago Sun-Times. Pauline began the “Dear Abby” column at the San Francisco Chronicle in 1956 under the byline Abigail Van Buren; she chose the first name from the biblical character, the last from the eighth president.

Both quickly earned reputations for dealing with previously taboo subjects such as teenage sex, rape, alcoholism and homosexuality, all the while dishing out advice with wit, humor, compassion and common sense. Their columns have since become the two most recognized names associated with advice.

But their journey wasn’t always a smooth one. Their competition for the higher readership intensified when Esther signed a one-year contract with the Sun Times and later appeared on “What’s My Line?” In 1956, her sister Pauline allegedly offered her own column to the Sioux City Journal at a reduced rate, as long as it promised not to run her sister’s column. For years the sisters did not communicate and teamed with rival papers.

Having put the past behind them, both have since teamed up with the Chicago Tribune and keep in close contact today.

Though the “Dear Abby” column only recently announced Jeanne Phillips as co-creator, she has actively been involved in its process since she was a teen.

“When Mama first started the column, I was about 14 years old,” says Phillips, who is Pauline Phillips’ only daughter. “I would earn my allowance by answering mail from other teen-agers under strict supervision. She’d hand me a dozen letters, I’d go do my bit, and then I’d hand them back for a signature or correction.”

One day, Phillips said, her mother handed her a letter written by a newspaper editor about his daughter who was unhappy, lonely and had a weight problem. “She said, ‘Could you just write her a letter and try to make her feel better?'” Phillips recalls. “So I did.”

She didn’t think about it until a couple weeks later when her mother told her she’d heard back from the girl’s father. “My mother said, ‘The letter you wrote made her feel so much better about herself. She’s made some changes and they’re starting to show, and I just want you to know you did a really good job, a really good thing.'”

The reinforcement was such a thrill, says Phillips, that she was hooked. Between 1961-’73, CBS Radio ran a five-minute long, six day a week special featuring “Dear Abby,” with Phillips doing the writing seven of those 12 years. In 1980, she became executive editor of the “Dear Abby” column and became co-creator in 1987.

“Since the very early 1990s, the majority of the writing has been done by me,” says Phillips, who studied anthropology at the University of Colorado. “In the beginning, when I was executive editor, I was editing her. Since 1990 she has pretty much been editing me.”

Though the name on the column may have changed, one thing that hasn’t is the scope of advice readers still seek today.

Those problems often manifest themselves through other pleas for help, including domestic violence, depression or suicidal thoughts, all of which the “Dear Abby” staff take seriously. Many writers include an address and telephone number, which Phillips says is a wonderful thing.

“If I think it warrants it, I’ll call people,” says Phillips, who admits to often making a few dozens calls each week. “I’ll call if I’m concerned about the pain the person seems to be feeling or if it is date or time sensitive. If they seem particularly depressed, of course I’ll call, just to establish that they’re feeling better now.”

Phillips says they utilize outside experts but don’t discuss the workings of the office. The problems they handle, she says, are highly confidential, and employees think of the office like they would a doctor’s office. All staff members must sign a confidentiality agreement as a condition of employment, “because we protect peoples’ privacy like tigers,” she says.

It was that same commitment to establishing trust that landed Eppie Lederer the job as “Ann Landers” in 1955. When the column’s former author, Ruth Crowley, died unexpectedly, Lederer competed with 27 other women for the position. In answering sample questions, Lederer consulted professionals which added authority to her answers. So convincing was her advice that some editors inferred she’d made them up herself. In the end, her homework won her the job and she’s been at it ever since.

Of the thousands of letters Dear Abby receives every week, choosing the few to publish isn’t usually a problem. “It’s a gut thing,” Phillips says. “You just know. They jump out at you.”

The biggest change in advice over the years is not the responses they give but the manner in which people ask questions.

“I’m not sure that the advice itself has changed,” Phillips says, “because we’ve always been pretty open and up front, not mincing any words. But I think people have become more willing to let it all hang out.”

About a year and a half ago, Phillips says the Department of Consumer Information wrote and said they had a packet of information for women they’d like to distribute, and wondered if “Dear Abby” could be of help.

“It was a collection of pamphlets that the government thought women would find handy,” says Phillips. “There were topics like nutrition, how to buy a computer, how to negotiate in buying a house or car, and other information you like to have tucked in a drawer because one day you know it will come in handy.”

Phillips put the information in the column with a resounding endorsement, and the DCI got the most enthusiastic response it had ever received for an offering. They distributed more than a million booklets and had more than 360,000 hits on their website.

Differences are made in other ways as well. “It’s humbling to read the thank you letters we receive that tell us we’ve changed or saved lives,” says Phillips.

Whether saving lives or dispensing advice, an estimated readership of 95 million people shows that people are listening to what “Dear Abby” has to say.

“I enjoy it when I read the columns,” says VanWinkel. “It’s a way to escape from the everyday humdrum of every bad thing that goes on in the newspaper.” And when you need a quick fix to a problem, she says reading through Dear Abby is faster than reading a psychology book.

“I don’t want to brag, but my mother is so proud,” Phillips says of her commitment to the column. “She looks at me and she says ‘You got the best of both of us,’ meaning her and Daddy, and she’s very proud of the job I’m doing. And it fills my heart with joy.”

This article first appeared in the Weekender on August 23, 2001.