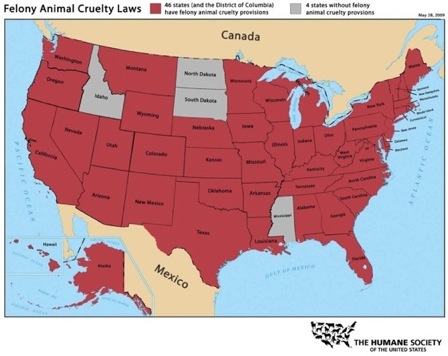 Don’t let the map fool you.

While the Humane Society of the United States has made enormous strides state by state in animal cruelty legislation over the past several years (due largely, in my honest opinion, to current HSUS President & CEO Wayne Pacelle’s tireless dedication and ongoing efforts), we as a civilized country still have a long way to go.

As of May 28, 2009, only four states remain without felony animal cruelty provisions, but don’t let all the others lull you into believing they don’t tolerate unspeakable crimes; many states hiding beneath the red-colored designation (meaning they have “felony legislation in place”) won’t bring about felony charges until a second or third offense. See where your state stands.

Another crime? Seeing the word “misdemeanor” in the same news article that details how a defenseless dog was beaten to death by its master for urinating on the floor.

First, though, let’s head to New York. There’s someone there you need to know.

Cheyenne Cherry, a 17-year-old New York teen, was arrested June 3 after admitting she threw her former roommate’s two-month-old female kitten, Tiger Lily, into an oven and roasted the animal to death. The reason she gave for torturing Tiger Lily to death: “I hate cats.”

According to ASPCA officials, Cherry brushed the incident off as “a practical joke.”

ASPCA official Joe Pentangelo says the animal suffered “an agonizing death.” Cherry and an accomplice left the apartment as the kitten cried and scratched at the oven door, Pentangelo said.

The tragedy was discovered by neighbors who noticed smoke and a foul odor coming from the apartment. When firefighters arrived, they found Tiger Lily’s smoldered remains. Investigators say the kitten was burned so badly, a necropsy had to be performed to determine the kitten’s sex.

It wasn’t the first time the kitty-killing Cherry had used the term “practical joke” when it came to abusing or killing other people’s pets. Cherry was charged in the armed robbery dog-napping of a teacup Yorkie in a Bronx park last June, police said. And, Cherry said it was also “just a joke” after her arrest for robbing a man of his iPod at gunpoint. She’d pleaded guilty to robbery and got five years probation.

Despite Cherry’s June 2008 arrest for larceny and extortion — along with two other busts — Cherry was released into her mother’s custody without bail; this after she was charged with aggravated cruelty to animals, burglary, arson, reckless endangerment and criminal mischief for burning alive her friend’s kitten.

Cherry’s community, outraged by her latest gruesome act and her dismissive attitude towards the crime, is asking that the 17-year-old be charged as an adult. An online petition has been set up requesting a modification of the charges, with petition signatures and comments being forwarded to the judge by month’s end. Though the site’s initial goal was 2,500 signatures, more than 13,000 incensed citizens already have signed — a vast majority also taking time to comment on Cherry’s barbaric crime. Sign the Petition Here.

Bobby Loggins, 35 and intoxicated, was upset. His young American bulldog, whom he obviously hadn’t taken the time to fully train, had just urinated on the carpet during Bobby’s house party at 1611 23rd Street in Sioux City. Instead of leading the dog outside as any responsible pet owner would do, Loggins punched his own loyal dog in the face approximately 30 times — in front of several witnesses, no less. Police reports confirmed the dog was bleeding from the facial area, and animal control officers said the dog died before help could arrive.

If that weren’t bad enough, Loggins, as well as one of his “guests,” lied about what happened.

Loggins told police he “accidentally” slammed the dog’s head in the door. And, according to Sioux City Police Sgt. Mike Post, an unnamed witness told police the dog had been hit by a car.

One witness, however, had a conscience; Post said 34-year-old Chad Peterson was one of the witnesses and reported the incident to police.

On the other hand, the man-without-a-conscience-dog-killing Loggins has been charged with animal torture and filing a false police report, both of which (do-I-really-really-really-have-to-use-this-word?) are misdemeanors. Loggins will likely be ordered to get some psychological counseling. Perhaps even do some community service. Meanwhile, a young unschooled dog met a horrendous death at the very hands of the man he trusted most.

Loggins was released from jail on bond about two hours after being taken into custody.

Misdemeanors? But what about That Map?

Are you asking yourself the same question I’ve asked myself a thousand times? “How can this animal torture/cruelty crime be a misdemeanor when the map clearly shows Iowa has statutes in place to make this crime a felony?”

The answer, my friend, is in the fine print. You’ll find it in Iowa Code 717B.3A under Animal Torture. What it means is that the Bobby Loggins of Iowa can relentlessly beat and kill a family pet with 30 hard punches to the face and still answer to no more than misdemeanor charges — until their second offense, that is, when that animal’s death matters and it becomes a Class D Felony.

It could be worse. In Alaska, one has three opportunities to torture or kill the family pet before being charged with a felony. Idaho, Mississippi, South Dakota and North Dakota have no felony provisions at all.

Shame on those state legislators.

One need not be a dog lover or cat lover or animal lover of any kind to possess the simple knowledge that animals experience pain no differently than human beings. But does placing the value of a human life over that of an animal preclude legislators from understanding the parallels in violent behavior exhibited by those who would inflict such pain and/or death on either?

It isn’t enough to just ask questions; we must demand answers, action and accountability. Our lives — and the animals with whom we so lovingly share those lives — depend on it.