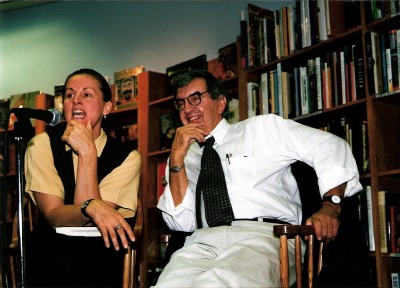 On September 29, 1994, my daughter, Jennifer Burgess, and I made a seven-hour trek from west-central Iowa to the Borders bookstore in Minnetonka, Minn., in order to attend a book reading by authors Larry McMurtry and Diana Ossana. McMurtry — the Pulitzer prize-winning author of Lonesome Dove, Terms of Endearment, The Last Picture Show and other monumental works — and Ossana, his writing partner, had just published their co-authored novel, Pretty Boy Floyd.

These are a few of the photos I captured that day. A million thanks also are extended to an unknown woman in attendance who used my camera to snap the photo of me with my all-time favorite writer, “Larry Mac” McMurtry. The photo remains displayed on the wall in my home office — just an upward glance away from my computer’s keyboard.

I’m thrilled to see Pulitzer prize-winning novelist Larry McMurtry still has his fingers in the screenwriting business, and doubly pleased he’s doing so with writing partner Diana Ossana. The “Pretty Boy Floyd” authors teamed up once again to script “Brokeback Mountain,” a film about two cowboys involved in a homosexual relationship and based on a story by (Shipping News) author E. Annie Proulx.

The controversial film won the Golden Lion at the Venice Film Festival Saturday — that festival’s top award — and has earned acclaim at Toronto. According to cnn.com’s Paul Clinton, the ‘Gay Cowboy Movie’ shatters stereotypes. It’s slated for U.S. release December 9.

Directed by “Crouching Tiger, Hidden Dragon” Oscar winner Ang Lee, the film stars “The Brothers Grimm” heartthrob Heath Ledger and Jake Gyllenhaal and revolves around two young men, Ennis Del Mar (Ledger) and Jack Twist (Gyllenhaal), who are hired to tend sheep for a summer in Wyoming and find themselves attracted to each other. The story begins in the early ’60s and follows the men over the course of their lives as they continue to meet. The actors said they hope the film shows a gay relationship in a matter-of-fact, unsensational light and that it contributes to tolerance.

God knows, we could use a little tolerance right now, particularly in a day and age when we have Governators who haven’t yet overcome fear and prejudice and stand ready and willing to strike down an historic “marriage equality” bill enacted by the California Legislature.

(No word on whether that played any role in Ledger’s decision to sell his Los Feliz home and move to Brooklyn, NY).

At any rate, I applaud Ledger for his courage to go beyond the confines of sexuality toward the more difficult topic of love and tolerance.

That’s what I call a Patriot.