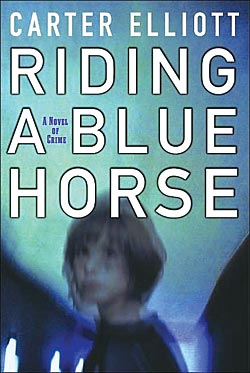 I just finished reading a terrific book. Actually, “terrific” doesn’t do it justice; this novel is incredible, outstanding, exceptional, and if Blogger had a thesaurus, I’d probably be adding a few more adjectives.

It’s called “Riding a Blue Horse,” by Carter Elliott. You may not have heard too much about it because it was published by Carroll & Graf, a (former) imprint of Avalon Publishing Group. The two parted ways shortly after the book’s publication, and Carter lost the publicist with whom he had been working. As many of you know, a publicist is to “their books” as parents are to “their children.” You watch them take shape, encourage their growth, then do everything possible to send them into a world where they’ll flourish and (hopefully) become wildly successful.

So….I’m temporarily removing my writer’s hat to don that of publicist pro tem. (And no, Carter is not paying me to write this. He knows a bit about bribes and the law.) In fact, he knows more than just a bit: he used to work for the CIA and had a second career in federal law enforcement. The former special agent also has his masters degree in clinical psychology, so I know — as a law-abiding volunteer prison counselor — he wouldn’t use psy-ops on me to surreptitiously get me to write this blog.

Riding a Blue Horse is the story of 14-year-old (and over the hill) Molly Small — who’s making her way to a West Virginia remote mountain county that headquarters a ring of kiddie-porn operators — and Molly’s unlikely protector, a lumbering, simpleminded 18-year-old the locals have nicknamed “Stupe.” (If you’ve never visited the Appalachian mountains, you will feel like you have before you finish the book.)

Carter brings to life the dialect and the folkways of one West Virginia community in a page-turning crime novel that snakes up snow-covered Sad Mother Mountain and skids down Dumb John’s Mountain with its words skating by faster than a car hitting ice on a hairpin curve.

Molly’s unexpected appearance in Shawnee turns out to be but the first in a series of unusual events facing God-fearing state trooper Roscoe Bragg and young postal inspector Rens Vandermeer. The day after she arrives, a small private plane crashes into Dumb John’s Mountain, leaving the pilot dead, and — huddled in the snowy wreckage, a terrified, helpless, illegally adopted six-year-old boy. There’s more surprises in store when, much to his astonishment, Stupe discovers the heavy leaf bag doesn’t contain the dead fawn his daddy said he’d hit and wanted Stupe to bury.

Now that you’ve got the book in hand, go get your comfy warm blanket and curl up in your favorite place to read. If it isn’t snowing there yet, just wait. You might want to crank your thermostat up a notch or two. If you don’t have a bookstore close by, it’s available on Amazon.com.

P.S. Have a Merry Christmas.