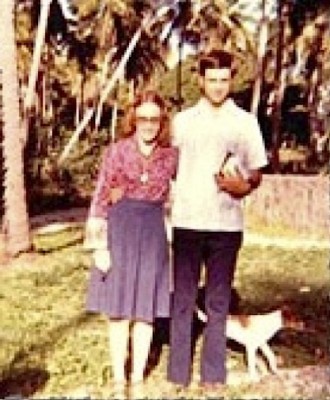 Barbara Watson and her husband, Ralph, just before they left the Dominican Republic in 1978, where they had served as missionaries for four years.

For more information about missionary life in the Dominican Republic, or to read Chapter One or see pictures, visit Wake Up Barbara.

Copies of the book may be purchased at Buy Books on the Web or by calling 1-877-BUY BOOK, and at Amazon and Barnes & Noble.

You might wonder how two boxes of faded yellow letters led to a memoir on the Dominican Republic, but for author Barbara Watson it was easy. Easy, that is, once she decided to open them.

“About 10 years ago, my mother returned to me two large boxes full of the letters I had written home from the Dominican Republic,” said Watson. “I shoved the boxes in my closet for a couple of years, not wanting to remember all the embarrassments of those youthful years. One day, she handed me yet another handful that she’d found. I never made a face. My father said, ‘Throw them away.'”

Instead, she pulled one out and began to read its contents. As she read through the others, the memories came flooding back, and within a few years, Barbara and her husband, Ralph, were back on their way to the Dominican Republic, where both had served as missionaries some 20 years before. The journey would reveal a startling discovery and inspire Watson’s recently published memoir, “Wake Up Barbara! And Help Me Find this Snake!

“The title is supposed to convey that the book is fun, that the protagonist gets through some situations that were frightening to her at the time, but funny or meaningful in retrospect,” Barbara says.

Newly married, Barbara and her adventurous Ralph moved to the Dominican Republic in the early 1970s at the urging of Dr. Tony Campolo, Barbara’s sociology professor at Eastern College in St. Davids, Penn. As part of a medical mission, Barbara would help fill prescriptions for eyeglasses from the used eyeglass collection and Ralph would work as a repairman. While Ralph embraced the place, the people, the culture and the music, Barbara battled the language, heat, and ran in terror from two-inch cockroaches.

“A book that had inspired me in my youth was ‘Christy’ by Catherine Marshall, and when I headed to the Dominican Republic, I thought I’d be like Christy,” Barbara says of her initial ideals. “In some ways, I think my book is somewhat like ‘Christy,’ in that we were both headed into a situation for which we were not well prepared.”

To deliver services needed, Barbara found herself traveling up and down a dangerous mountain to Azua, where the cliff-side roads and hairpin curves were marked with crosses every few feet. Auto supplies were scarce for the medical caravans, with parts often configured from variable kitchen utensils. When tires got too thin, the insides were padded with newspapers to protect the inner tube. Over-ripe bananas provided the axle grease.

“Things we throw away here, Ralph was forced to rebuild, like motors and transformers,” says Barbara. “He dug wells using 7,000-year-old methods, and lined them with rocks like the Pilgrims did in Boston. Altogether, an unforgettable experience, and one you could not pay money for.”

The book is written in letter format and came from original documents. Barbara says she wrote the book, in part, to educate people about the Third World and give them ideas about how they can help, like saving their used eyeglasses.

All over the U.S. and Canada, Lions Clubs and churches collect used eyeglasses and send them to Third World countries. Twice a year, Barbara says, they would hold a two-week eye project where Dominicans from all over the country would travel by foot, donkey, or publico (taxi) to the project. Ophthalmologists would perform eye surgeries and opticians would fit the glasses. Thousands were given away during each project, which took six months to prepare.

Relationships also play a central role in the book, with Barbara’s relationship with Ralph at the center and a sub-plot of Watson’s friendship with Sue, her best friend from Texas. Many of the letters were written to Sue.

“The book explores the choices we make in life, and the ramifications of those choices,” says Barbara. “[Marshall’s] Christy became what she needed to be – she became the right person for the job. That didn’t happen with me, and that’s another theme of the book – finding our place in this world.”

Of their recent trip to the Dominican Republic, Barbara says she recognized almost nothing. Hurricane David had changed the countryside. Economic growth had boomed in some areas, with Burger King, McDonalds and BMW stores frequently populating the landscape. Yet, pockets of incredible poverty still exist, says Watson, adding, “Some things never change.”

Of the journey and revelations it laid bare, Barbara admits she struggled to find her own place. “I needed to be able to contribute in life and not just be along for the ride,” she says.

As for Ralph, “he learned the true value and meaning of freedom, individual initiative, and self-reliance,” she says. “He was forced to do, as he expressed it, ‘McGyver type bidness.'”

For a young person, Barbara says it was the most eye-opening experience she could imagine.

“Neither of us has been the same since our years in the DR,” says Watson, who now resides in South Carolina. “We don’t take running water and functioning public rest-rooms – that almost always have toilet paper and soap – and the wonderful smooth highways throughout this country for granted. I do not complain about taxes because I’ve lived where there are no benefits of the services provided by our taxes – the fire department and police and roads, the infrastructure of life in the U.S., telephones everywhere, drinkable water from every faucet, flushable toilet paper – I love the USA!”