Okay. So I’ve been safeguarding this 1956 Benson High School (Omaha, NE) yearbook for some time for Bill Bowley, a close family friend. Bill attended Benson High with Nick Nolte, who (as most of you know) went on to become one helluva actor. (One of my favorites, in fact.) Bill, on the other hand, went on to own and manage a very successful roofing company — until Parkinson’s Disease forced him into early retirement several years ago. 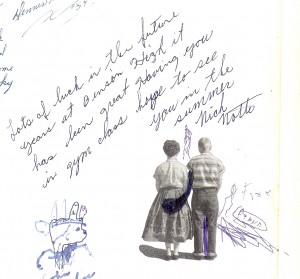 In 1956, both Bill and Nick were high school sophomores. Nick was the kicker for Benson’s football team (according to Bill, Nick was “the starring quarterback”) and they also shared some good-ol’-boy times in gym class and on the basketball court.

Nick signed Bill’s ’56 Benson High School annual, and though they both graduated in 1959 and will celebrate their 50-year high school class reunion(s) this year, here is where the road gets muddy.

Bill swears both he and Nick graduated from Benson High in ’59, and Benson’s Wikipedia page indeed lists Nick under notable alumni. Further research, however, indicates Nolte was kicked out of Benson High for “digging a hole and hiding beer before practice and then getting caught drinking it during a practice session.” After Nolte’s expulsion from Benson High, according to the actor’s Wikipedia page, he attended Westside High School in Omaha, and that alumni roster also shows Nolte as one of their graduates.

Additional online research produced these same details, over and over again.

So why does it matter, 50 years after the fact, which of these two high schools is Nolte’s true alma mater? Simple. Because his former friend and Benson High classmate, Bill Bowley — who recently underwent a brain implant to help control some of his advanced Parkinson’s disease symptoms — wants to attend his 50th high school reunion this June 5-6, and he’s got his heart set on linking up and visiting with his old friend Nick.

I’ve promised Bill I’ll do my best to track down Nolte and ask if his summer plans include a Midwestern high school reunion, even though I suspect Westside High School (whose 50th class reunion is Aug. 28-30) most likely lays the bigger claim to one of Omaha’s most popular and successful sons.

But, who knows. Despite the actor’s current shooting schedule (“King Shot” in production) perhaps he’ll work in a two-day break to catch up with friends who-knew-him-when. Based on the Nolte movie trivia questions Bill often poses to me, I suspect some of Nick’s old friends may indeed include some of his greatest fans.

Nick wrote the words in the yearbook, but now it’s time for Bill to say them. “Hope to see you in the summer.”