We humans, by nature, are forgiving people.

After all, we all make mistakes. None of us are perfect.

We all, at one time or another, have done or will do something so incredibly stupid we can only hope and pray our neighbors … our friends … and (God forbid ) our families, never discover about our sinful souls.

These mistakes, however, do not by nature involve taking the life of another human being.

At one time, and despite the ordinary man’s quest (and, often, need) for vengeance, I truly felt I could forgive those responsible for taking my stepfather’s life. My mind enlisted every kind of reasoning. 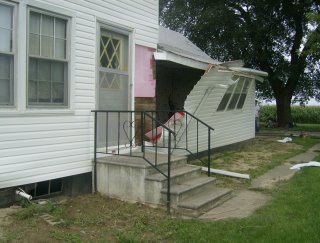 The explosion, which occurred in the home’s basement, blew out the upstairs walls around the wooden frame house Mom and Earl and family members had just finished insulating and re-siding. See a “before and after” slideshow of both inside and outside the house in All That Remains.

I told myself, the thief/thieves didn’t deliberately mean to cause Earl’s death. And when they broke into the farmhouse and cut and stole the copper propane lines to later sell for scrap metal worth perhaps $10 to $15, they probably didn’t realize the basement’s cut lines would continue to discharge propane gas into the house. And even that they probably didn’t think about the smallest actions and reactions — the plugging in of a fan hours after the burglary when the house had long since been aired out — that would lead to an explosion and melt the skin from a man who, even at 80, still worked hard every day and was there to install a new water pump in one of the rental properties he and his wife depended upon for their livelihood.

The truth is, I envisioned the thief and/or his accomplice (yes, there were two of them present that night) coming forward, acknowledging the fact one had burglarized what used to be my grandparents’ former country home while the other kept watch, with at least one of them asking for forgiveness and saying something like “This didn’t turn out like we thought it would,” and last, but certainly not least, “I am so very sorry for the painful death this caused for Earl Thelander and for what this has done to his wife and 11 children.”

Yes, laugh if you will at my unusual (and perhaps unrealistic) expectations from a petty thief. But, given the number of individuals who know who did this (make no mistake; there are many), and given the leniency and understanding my family has extended in the first five months following my stepfather’s unnecessary and untimely death, we honestly expected a day would come when one good man (or woman) would step forward and do the right thing.

Thus far, they have not.

Even where pleas to one’s conscience have failed, so have our family’s attempts to rouse anonymous tipsters with a $5,000 Reward.

“The only thing necessary for the triumph of evil is for good men to do nothing,” said the British Statesman and philosopher Edmund Burke.

I only wish Mr. Burke were around today because I’d sit him down and tell him, “Evil will not triumph this time.”

Not with Earl Thelander. Not with this family. And we’re a forgiving family. But, our patience is running out.

So is time . Not just for those responsible for Earl’s painful and needless death, but those who know who they are and what they did. They, by God and under law, will be held just as accountable.

It’s not too late for them to still do the right thing. But, the clock is ticking.

Make no mistake about it.